skip to main | skip to sidebar

I had all of my animation classes in a roll yesterday from 8:30am to 6:15 pm. All I can say right now is that I can't believe I am actually studying animation. After dreaming about it for so long it's kind of a shock to be actually doing it. 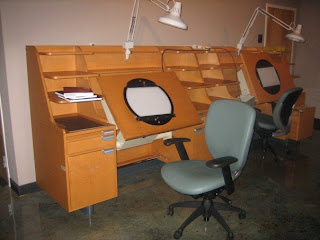 Yesterday was like a whirlwind of information. Two of my teachers are from Disney and one from Dreamworks. I have Gary Schumer for traditional animation, Sean McLaughlin for computer animation, and Dominic Avant for concept design. Each of them went over the course syllabus and gave a brief introduction of themselves. Gary Schumer worked in the Disney training department for years (teaching interns) before becoming an effects animator. Sean Mclaughlin taught on animationmentor.com and had been working for Dreamworks until two weeks ago. Dominic Avant worked for Disney until the Orlando studio was shut down. They are an exciting bunch and I can't wait to learn more from them.

A few posters of movies Ringling grads worked on: 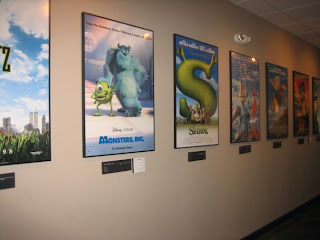 It was made very clear in the past two days that Ringling takes its academics very seriously. Attendance is crucial; in the CA department students are allowed only one excused absence. More than that and your grades start dropping by the letter. A tardy of more than 10 minutes counts as an unexcused absence. If you miss more than four classes then it automatically results in failure of the course. Lets hope I don't get sick!

The restrooms on the computer animation floor: 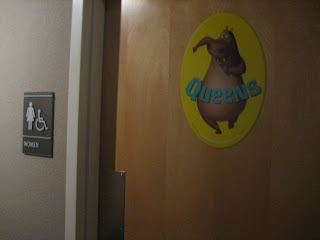 People in my class are so talented! Some of them really makes me nervous. We did some preliminary character designs and their drawings showed either solid understanding of anatomy or were very imaginative. There is so much I need to improve on! I really have to bust my butt here at Ringling!

This is it for now, there's work to be done.
PS: here's my new toy loaded with CS3, MS Office, and Corel Painter courtesy of Ringling College of Art and Design. 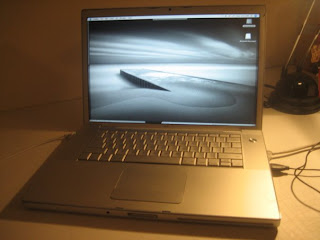 Hi Yetizoo, I think we're in the same classes - (I'm the black guy with tatoos in you CA1 and TA1 classes, lol). I agree with you it's been a great experience so far and I can't wait to see how everyone starts to grow as artist and animators. See you around.

Howdy, howdy. How's re-experiencing school again? Anxious, excited, both? It's only natural. Wonder if Ringling exams have curves? I see you've modified blogger a bit, and Seth and I are no long under the friends links. Geez, you're so fickle. It's been what, a week, and it's already out with the old and in with the new. Not only are we not even on your top friends list, we've been completely removed. So sad, haha. Well fine, be that way. We don't like your Floridian types here anyway in Minnesota. Good luck with school :0)

I deleted my last post cause I responded to Ben - duh. I've been trying to add you as a friend but I think the blogger is smarter than me, lol. I had to miss school today for an apointment at the Veteran Affairs office and car trouble. I REALLY, REALLY, hated to miss anything - especially with Ringlings hardcore attendace policy. I'll see you on thursday and I'll update my blog sometime today so you can see my artwork. :)